I've wanted to make a vegan cheesecake for a while now. My Terry's Chocolate Orange Cheesecake is one of my most popular non-vegan recipes on my blog, so I thought it was only fair that I made a Vegan Chocolate Orange Cheesecake so everybody can enjoy this delicious treat! Most vegan recipes are super healthy, which is great, but I decided to make this more of a indulgent treat by adding a bourbon biscuit base! This cheesecake is super creamy, packed with chocolate orange flavour and so delicious! It would really impress at a dinner party. It'd also be sooo delicious with a dollop of coconut cream! I've tested this out on non-vegans and they loved it too!

For those not residing in the UK, a bourbon biscuit is a chocolate biscuit filled with a chocolate creme. They are also vegan friendly! (Do check the label before you buy, but most bourbons are free from animal products.) I also made my own chocolate orange segments using dark chocolate, orange extract and a segment shaped mould - it was easy to do and really made the Vegan Chocolate Orange Cheesecake extra special!

To make the bourbon biscuit base, use a food processor to blitz the biscuits into crumbs, add melted dairy free butter, and press the mixture into the bottom of the tin. Put it in the fridge to set.

To make the filling, mix together the soaked cashews, orange juice, orange extract, cocoa powder, maple syrup and coconut milk. Blend the mixture in a food processor until smooth. Then add the melted coconut oil in stages, mixing it well between each addition. Pour the filling into the tin and smooth it on top. Put it in the freezer to set overnight.

To make the chocolate orange segments, melt the dark chocolate, then stir in the orange extract and golden syrup, and pour it into a mould. Leave it to set in the fridge, then pop them out of the mould. I'm far too lazy to temper chocolate, but if you did it would give them a lovely shine!

Once the cheesecake is set, let it come to fridge temperature so it is easier to slice. Then decorate it with some melted dark chocolate. Add the chocolate orange segments and some orange zest to serve. 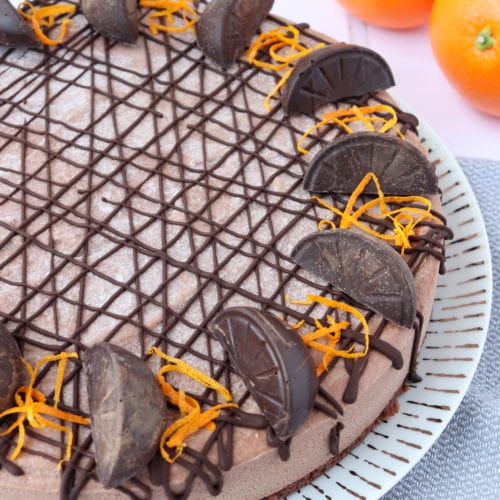