After the departure of two bakers (Mark and Deborah) on last week’s GBBO, the series continued with pie week! The first request from the judges was a double crusted fruit pie. It was not to be soggy (bottom or top!), must hold it’s shape when cut into, and Mary noted that the fruit should not be overcooked as this will only encourage the dreaded… soggy bottom! 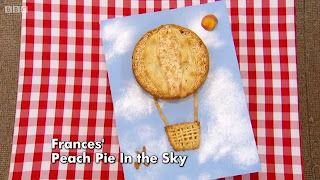 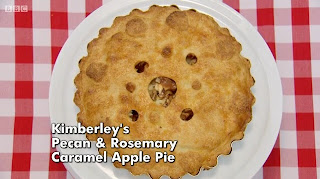 Frances was at it again with her styled bakes, and made a James & the Giant Peach & Frangipane Pie, however the judges said it had no flavour, not enough peaches in it, and it was bland and dry. They warned her about having too much style, and not enough substance. Kimberley knocked it out of the park with her Pecan & Rosemary Caramel Apple Pie, Paul said it was the nicest pie he’d had in some years and tried to carry it away with him! Rob and Ruby both did well, but everyone else suffered from soggyness, lack of flavour and crumbly pastry! 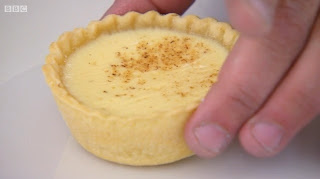 This week’s technical challenge was Custard Tarts, from a Paul Hollywood recipe. The requirements were golden pastry, and a layer of even, smooth custard with just a little bit of wobble. The dough had to be worked slightly more than a usual shortcrust, so it would be robust without becoming chewy. Making a shortcrust pastry is quite a straightforward task for a regular baker, so the first step didn’t cause many problems. The custard filling was where the bakers stumbled as the only instructions provided were “make the custard filling”… oh Paul! 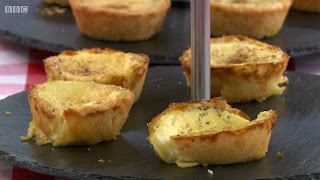 Frances was the only one who heated the custard before baking it. The bakers spent the next half an hour staring into their oven doors. Once the tarts came out of the oven, the nightmare of getting them out of the tin began. The sound of knives scraping against muffin tins began…and frustration reigned over the GBBO tent. Only clever little Ruby used little strips of baking paper to easily lift hers out of the tin! Frances won the challenge, Beca came second and Rob third. Glenn was last with Ali in 8th place and Christine in 7th (her tarts pictured above). 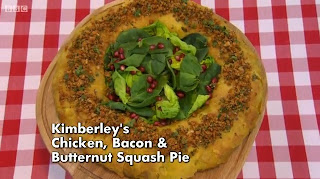 This week’s showstopper was a filo pastry pie. The pastry had to be made from scratch and could be shaped however the bakers wanted. Filo pastry is notoriously difficult to work with, it has to be worked and worked to build up a vast network of gluten so it can be stretched out thin enough so that a newspaper can be read through it. Anyone who even dares to make filo from scratch deserves a medal in my book! 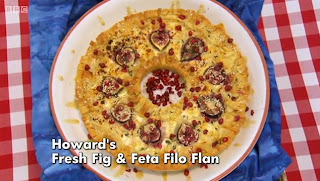 Howard baked his Fresh Fig & Feta Filo Flan in a decorative mould – which required Mel and Sue’s help to remove it, with Glenn and Beca nervously looking on! Rob talked about his membership in a local mushroom foraging club, and talked about the dangers of his hobby, “it’s a very unforgiving past time, you get it wrong and you can pay a hell of a price…some mushrooms, you eat them and there is no cure…you just dissolve” he said. Luckily, shop bought mushrooms were in his pie. The bakers vied for table space as they stretched out their filo. Ali’s filo measured 2 metres in length! 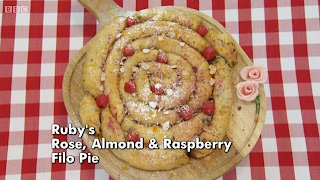 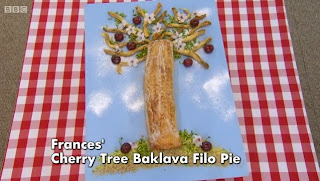 Beca, Rob and Frances didn’t get good results from the judges. Frances again suffered from style over substance, Rob’s Mushroom Spanakopita was underbaked and soggy, and Beca’s filling was not liked by Paul and Mary. Glenn, Ali and Christine all got average results with the judges liking some things about the pie, but pointing out mistakes. Ruby’s Rose, Almond & Raspberry Filo Pie was labelled as ‘beautiful’ by the judges, Kimberley received glowing praise for beautiful layers and a fantastic taste. Howard also did well, the judges liked his pie and called it elegant with complimenting flavours. 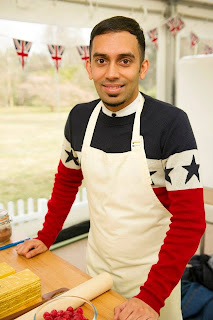 Ali was the one to leave this week, which I am very sad about. I don’t think it was his time to go yet, and I was shocked when they announced his name. A lot of the other bakers seemed very sad to see him go, he is obviously a lovely guy. Christine said he was a lovely, kind and nice man and she would miss him. Howard was welling up too, bless him. I will miss Ali too! Next week – biscuits!

This week I decided to make Custard Tarts. I love Custard Tarts and really wanted to try them. I decided to follow Paul Hollywood’s recipe, which you can find here. Although, and you will find out why as you read on, I personally would make some tweaks to the recipe(!) Shhhh don’t tell Paul! 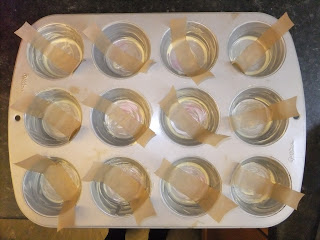 I started by liberally greasing my muffin tin with butter and I took a leaf from Ruby’s book and put strips of greaseproof paper in them to lift the tarts out with. 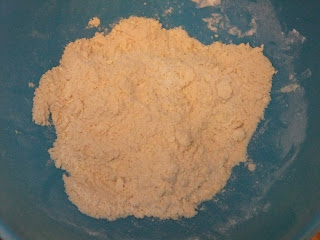 In a mixing bowl I used my fingers to rub together 120g butter, 165g plain flour and 25g ground almonds. Once it looked like breadcrumbs, I stirred in 55g caster sugar. 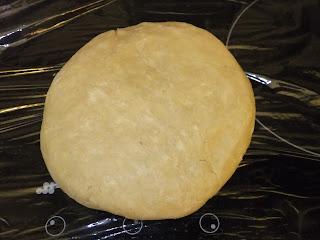 I added one egg, and brought the mixture together into a dough. Once it was smooth, I wrapped it in clingfilm and chilled it in the fridge for 30 minutes. TIP: Have your clingfilm ready before you get your hands covered in pastry and flour! 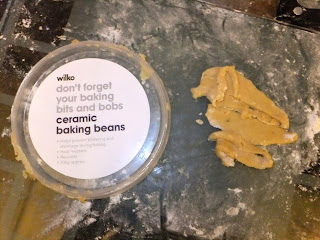 I didn’t have an 11cm/4.5″ cutter as required, so I used the lid off my baking beans as it had the same diameter, and I used a knife to cut around it. I rolled out the pastry as thin as I could but only got enough for 11 tarts. In the above photo you can see how much dough I had left. 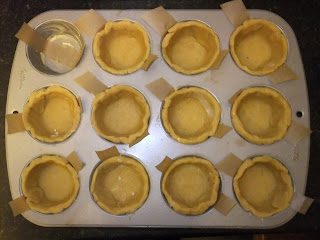 I probably didn’t roll it out quite thin enough, but with the amount of dough you have, getting exactly 12 is tight. God knows how you crimp the edges, with finesse I imagine, I didn’t do this. 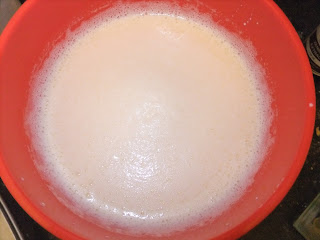 For the custard, I whisked 7 egg yolks and 90g caster sugar together until smooth. I heated up 700ml whole milk until luke warm, then poured it into the eggs, whisking as I poured, it went nice and frothy. I also added 1 tsp vanilla extract. TIP: Put the leftover egg whites into ice cube trays and freeze them, the next day, remove the frozen egg cubes and put them in a freezer bag for easier storage. Defrost them as needed. There are definitely going to be some macarons or meringues in my future! 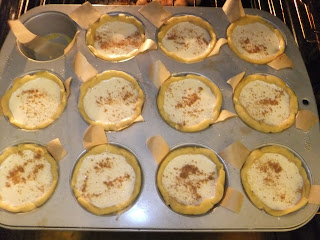 Pre-heat the oven to 200C/400F/Gas Mark 6. I placed the tarts onto the shelf, then poured the custard in using a jug. I filled up the cases as much as I could, then sprinkled ground nutmeg over the top. There was a lot of custard left, even if I had 12 pastry cases, there would still have been enough for 2 or 3 more tarts. So the amount of custard is something I would reduce in this recipe. 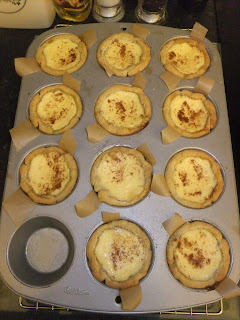 I baked for 15 minutes on this heat, then turned down to 180C/350F/Gas Mark 4 for a final 10 minutes. I took the tarts out and let them cool for 30 minutes in the tin. The custard had a nice wobble to it! 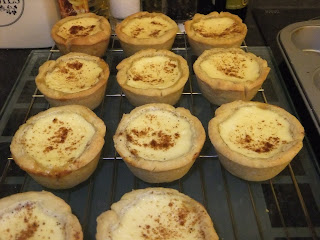 With the help of the baking paper strips, the tarts came out of the tin extremely easily and without any sticking problems! I left them to cool on a rack. 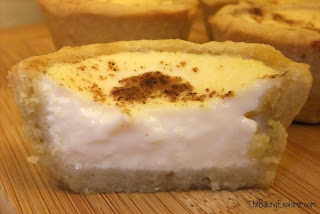 I cut into my tarts and was pleased to see the custard retain its shape! I think the custard could have done with slightly longer, no more than 5 minutes. But it was cooked and tasted great, I ate two right there and then – I just couldn’t resist! 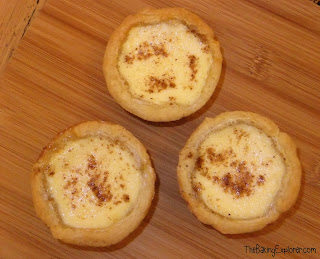 These went down a storm, who doesn’t love a custard tart?! A couple of people thought the custard was cooked enough, and a couple others agreed with me that it needed a few more minutes. So this being my only issue, and seemingly a matter of taste, I was extremely pleased. I will definitely make these again!