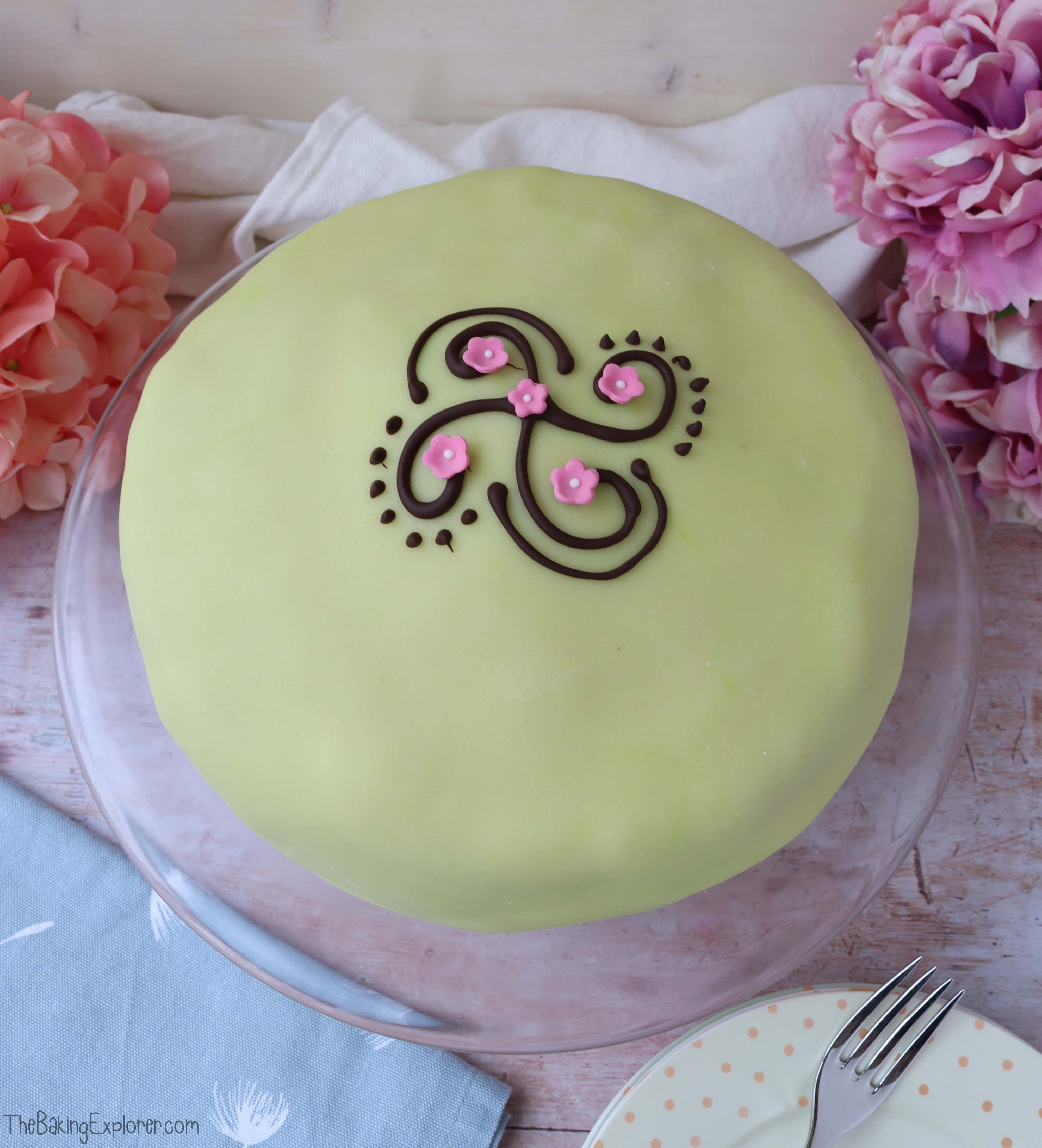 If you've not heard of a Swedish Princess Cake before then you are in for a treat! It's made up of layers of light genoise sponge, filled with creme pattiserie, jam and whipped cream. Then it's covered with green coloured marzipan and decorated with dark chocolate and sugar flowers. You may remember it being a technical challenge on The Great British Bake Off, and it is quite a complex bake with several different stages. I spread it out over a couple of days by making the creme pattiserie and the genoise sponge the day before, then I assemble and decorate it before serving the next day. If you are up for the challenge I can promise you it's worth it, as it's absolutely yummy!! 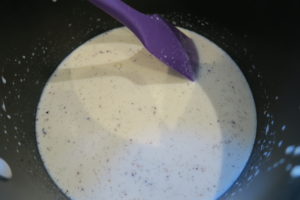 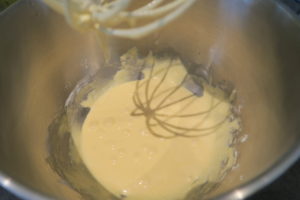 I started by making the creme patisserie as it needs time to cool down. In a pan on a low heat I warmed the milk with the seeds from a vanilla pod until it started steaming. In my food mixer I whisked up the egg yolks and caster sugar until they were pale and thick. I added cornflour to the egg mixture and let it combine, then turned the mixer back on and poured the warm milk in slowly. 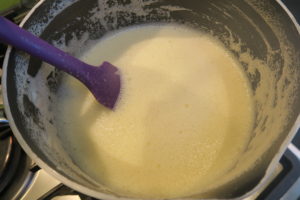 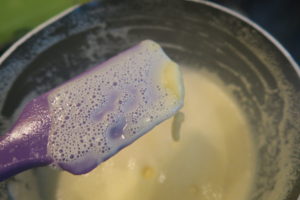 Then I poured the egg and milk mixture back into the pan and heated it up whilst continuously stirring. There is a moment when it suddenly starts to thicken and at that point I started whisking to keep it smooth and stop any lumps. 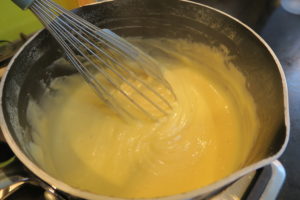 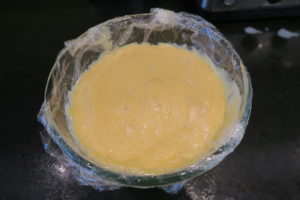 Once the whole mixture was thick and smooth I took it off the heat and put it in a bowl. I covered it with cling film making sure the cling film was touching the top of the creme pattiserie. Then I left it in the fridge overnight to cool. 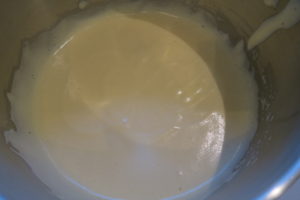 Next up was the genoise sponge. In my food mixer I whisked up eggs with caster sugar until pale and super thick. When you lift the whisk out the mixture that falls off should stay on the surface for 3 seconds before sinking in - this is called the ribbon stage. 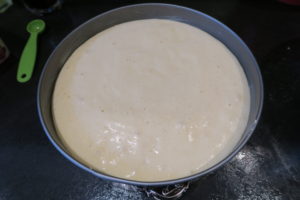 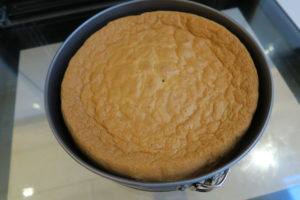 I folded plain flour and sugar into the egg mixture very gently so as little air was lost as possible. I then put it in the tin and baked the sponge for 25 minutes. 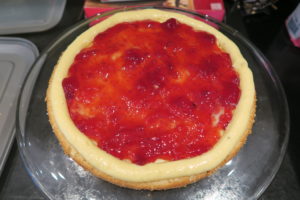 Once it was fully cool I carefully cut the sponge into three and put the first piece on my cake stand. I spread a thin layer of the creme patisserie onto it, then piped a border of it around the edge and filled the middle with jam. 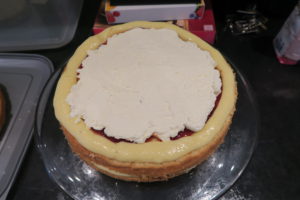 I put the second sponge on and spread over more creme patisserie and did another border around the edge. Traditionally, there is only meant to be one layer of jam, but I love jam so I added it to both layers! This time the jam got some whipped cream on top of it too.

I placed the final sponge layer on, then spread double cream over the whole cake, making a dome shape on top. 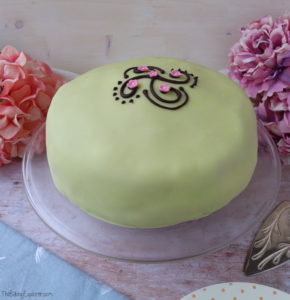 Then I kneaded green food colouring into natural marzipan and rolled it out, then covered the whole cake with it as neatly as I could and trimmed the edges. To finish the Swedish Princess Cake, I melted some dark chocolate and piped a design on top, and added some pink sugar flowers. 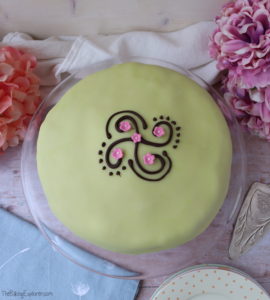 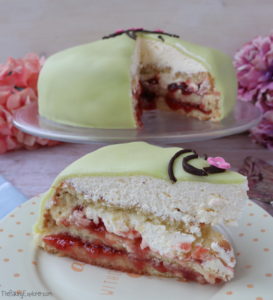 When the Swedish Princess Cake was cut the layers were not very well defined as I cut into it immediately! If you let it set in the fridge for an hour the layers will look much better when you cut it. It's a very indulgent cake and there is obviously a ton of cream, so I think the jam is a nice fruity way to offset the sweetness. And even if you are not a huge fan of marzipan, it's not overpowering. 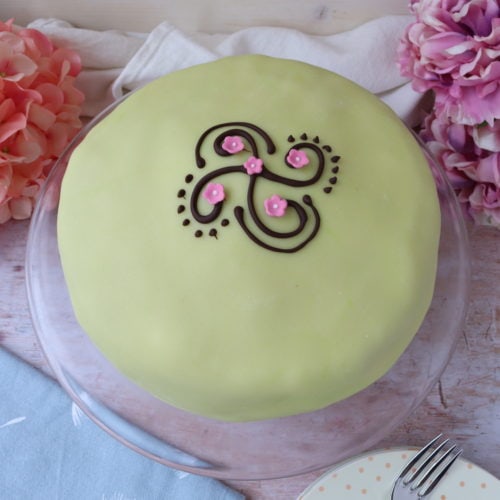 For the genoise sponge

For covering and decorating

Recipe adapted from The Telegraph.