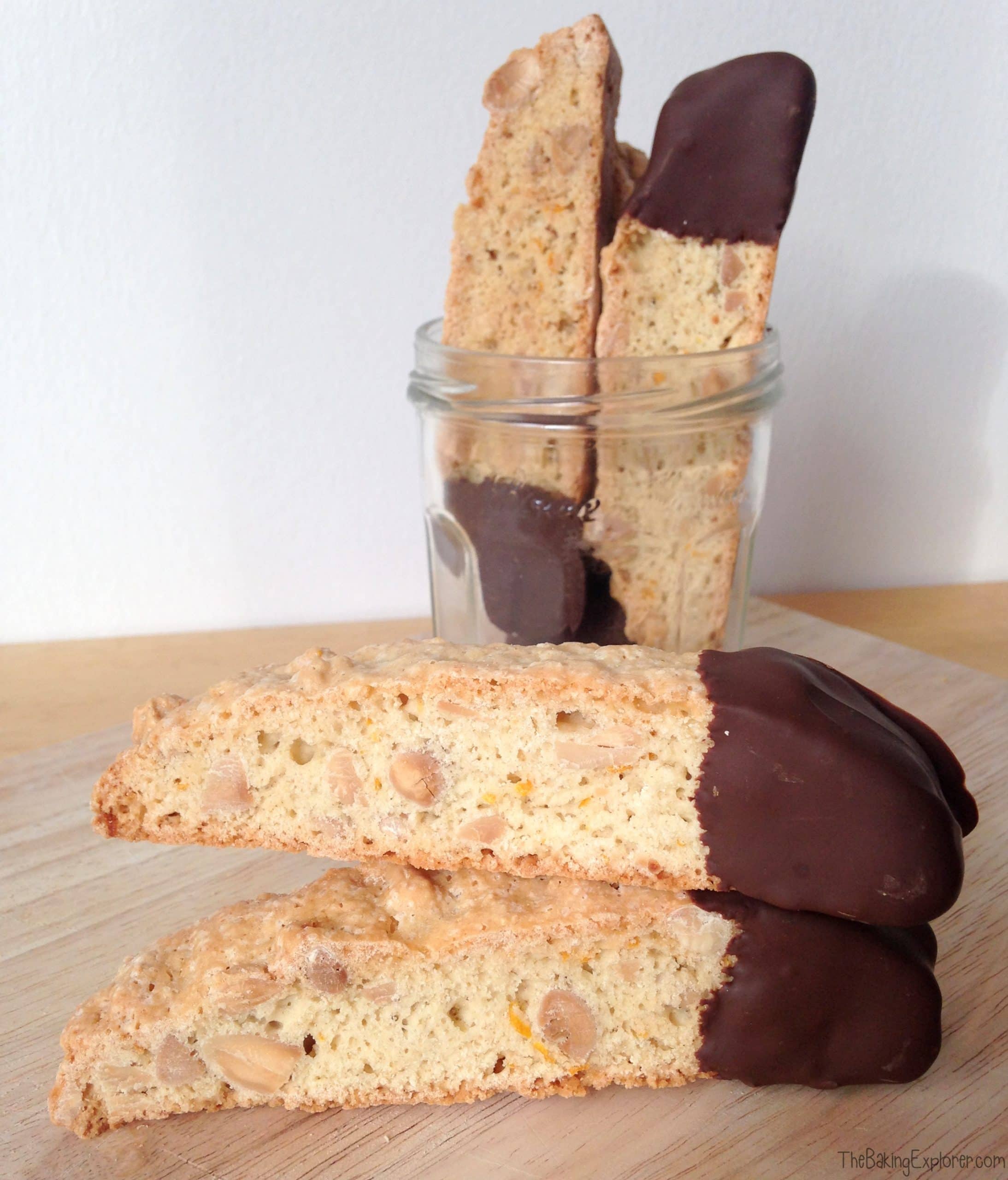 Jump to Recipe Print Recipe
We're on week two and that means biscuits on The Great British Bake Off. The first challenge was to make Biscotti - an Italian, twice-baked biscuit. They had to make 24 of them whilst maintaining consistency. Paul and Mary were looking for a dry biscuit with a good snap, but not so dry it breaks your teeth!

There was some really experimental and unusual flavours being used in the biscotti. Alvin flavoured his with jackfruit, which is very popular in South East Asian cooking. Ian added rosemary to his mix, and Ugne used white wine and goji berries. We also found out that Paul (the contestant Paul, not Paul Hollywood) used to be a cold stream guard aka one of those guards in the big black fuzzy hats that stand outside Buckingham Palace!

The biscotti had to cool before it's second bake, que a lot of baking tray wafting from the contestants. I was impressed with Mat's dedication to uniformity, he used a ruler to measure each biscuit before slicing! My favourite's were Tamal's Cinnamon, Maple & Cranberry Biscotti. They looked amazing, but the judges felt there was too much going on in terms of flavour. Ian got glowing results for his addition of rosemary to his biscotti Dorret didn't do too well as Paul said her biscotti had no flavour.

This week's technical challenge was to make eight Arlettes. Of course, no one had heard of them! They are biscuits made from puff pastry and rolled to be wafer thin and create a pretty swirl. They originate from France and are cinnamon flavoured. Paul was rubbing his hands together and grinning quite wickedly at the thought of the bakers trying to make these!

The bakers struggled with time as they had to fold the dough and chill it several times, they also weren't sure at which stage they should add the cinnamon, and which way to roll up the dough. Marie really struggled as her oven wasn't set correctly and only presented four Arlette's, which meant she came last. Paul and Nadiya didn't do very well either. First place went to Dorret with Flora in second and Ian in third.

I was really excited by the showstopper this week as it sounded so fun and really opened up the opportunity to be creative. We have some really imaginative bakers on the show this year! They were asked to make 36 biscuits, presented in a box also made out of biscuit, but a different kind of biscuit. Mary wanted them to be ambitious, show a variety of techniques, and of course taste amazing!

For the box, most contestants went for gingerbread and shortbread as they are sturdy. For inside the box both Ian and Paul made pink macarons, both Flora and Mat made earl grey flavoured tea bag shaped biscuits, Alvin went for brandy snaps and Nadiya chose fortune cookies (pictured above). Ugne made some traditional Lithuanian biscuits, Tamal made checkerboard shortbread and Dorret made some green tea flavoured frog biscuits, although Paul Hollywood though using a cookie stamp was a 'shortcut'. Not sure if I agree, surely he didn't expect her to cut out 36 frogs by hand?! Oh wait, he probably did...!

Ian very cleverly made a cylindrical box using a tin he had made himself, which impressed the judges. Sandy was the only one to make a savoury biscuit box using sundried tomato and parmesan flavours. Mat made a fire engine box which I thought looked brilliant! And Paul agreed, calling it 'fantastic'. Both Alvin and Nadiya didn't manage to finished their boxes, with Alvin unable to construct his and Nadiya unable to decorate hers. Despite that, both their biscuits were really impressive and well made.

Marie left us this week, the judges felt her bakes were too simple and she wasn't pushing herself out of her comfort zone. Ian won star baker, deservedly so! Next week it's time for bread week, or as Mat would say, a doughverload! 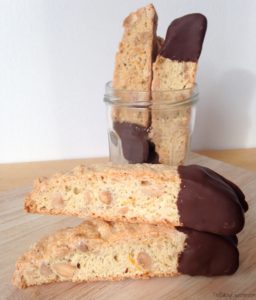 I'm not a huge fan of biscotti, and I have made it once before, but I was a bit pushed for time this weekend as I went to Aberdeen to visit my brother. I would have liked to have given the biscuit box a try, maybe when I have more time! I loved how Tamal dipped his in chocolate so I decided to do the same as I think it improves the presentation and overall look of the biscotti. 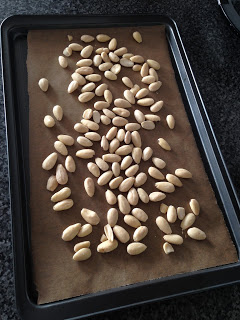 To start I toasted blanched almonds. I laid them out onto a lined baking tray and popped them in the oven for 8 minutes. 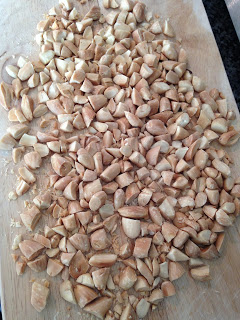 Once they were toasted I left them to cool, then chopped them up. 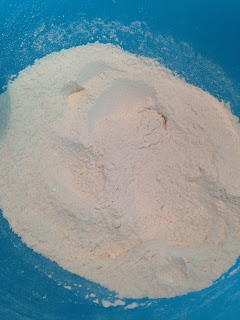 For the biscuit dough I weighed out plain flour, granulated white sugar, baking powder and a pinch of salt. I mixed them together. 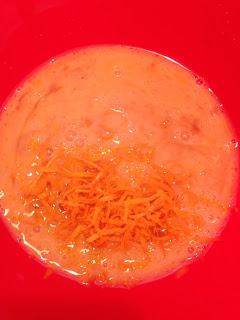 In a separate bowl I beat eggs with vanilla extract and almond extract, and added orange zest. 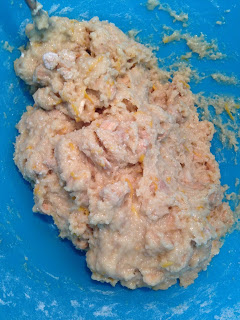 I mixed the wet and dry ingredients together, along with the chopped almonds, which made a very wet dough. 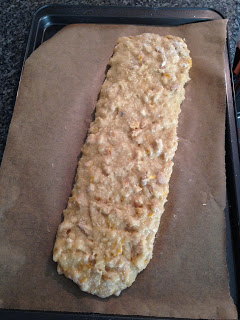 Then I carefully shaped it on the baking tray into a rectangle, it was approximately 35cm long and 10cm wide. I didn't bother rolling it on the work top as it was far too wet. 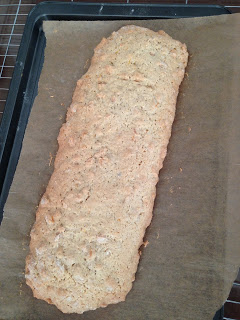 It baked for 35 minutes. Depending on your oven it will take 30-40 minutes. Then I left it to cool for about 30 minutes. 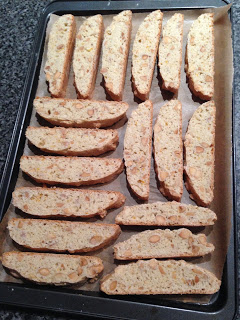 I used a serrated knife to carefully slice the cooked dough, then I baked the slices again for 20 minutes, turning them over at the 10 minutes mark. They were nice and crisp and when I pressed them in the middle there was no give. 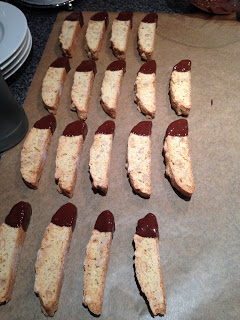 For the final touch I melted dark chocolate and dipped in one of the edges of each biscotti. I left them to set on some baking paper. 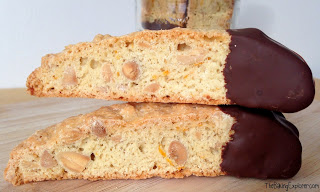 I was really pleased with my biscotti! I really liked them! The almond flavour was lovely and the orange came through, if you wanted a stronger orange flavour you could double up the zest quantity, but I was happy with how these turned out. They were just crunchy enough so no risk of any teeth breaking! I think I'm going to go and have one with a hot drink... 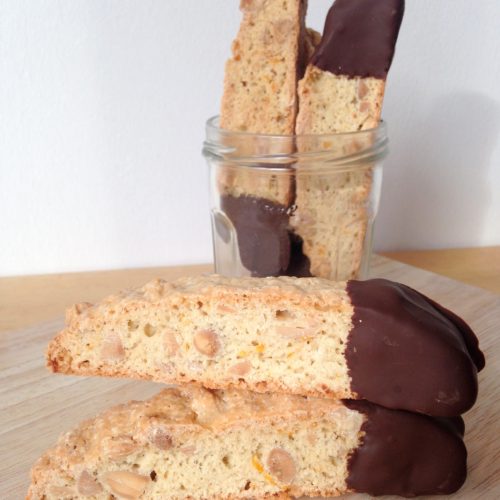