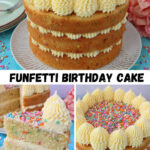 Funfetti Birthday Cake is sometimes known as confetti cake, but I prefer the name funfetti because this cake really is so fun! It's made by mixing rainbow sprinkles into the cake batter which creates the effect. Then I've decorated it with more sprinkles on top! It's perfect for a party, and especially birthdays! I first made this Funfetti Birthday Cake for my birthday, which is why I've named it as such. It's flavour is simple vanilla, which is that classic flavour that everyone loves.

The Funfetti Birthday Cake is so pretty when cut into! It has such a colourful and festive appearance. The bright rainbow colours of this cake are what make it stand out, and the light vanilla sponge and sweet vanilla buttercream give it lovely flavour.

Funfetti cake goes by many names - confetti cake, birthday cake and sprinkle cake. The word funfetti is infact a combination of the words "fun" and "confetti". The trend of adding brightly coloured sprinkles to vanilla cake was started by the American company Pillsbury in the late 80s, and it has been popular ever since! It is a very simple concept of stirring sprinkles into cake batter, and then after baking you get brightly coloured dots throughout the sliced cake. It does not change the flavour of the cake, but adds a fun and unique appearance!

How to make Funfetti Birthday Cake

Make the sponge by mixing together butter and caster sugar. Then add eggs, two at a time, and mix between each addition. Then add vanilla extract, and finally fold in self raising flour.

Then fold in the sprinkles! Divide the mixture equally between the tins and bake the cakes for 35 minutes

Leave the cakes to cool fully. Make the buttercream by mixing butter, icing sugar and vanilla extract together until smooth.

On a plate start stacking the layers and piping buttercream between each one.

Put on the final layer of sponge and smooth icing all over the top using a palette knife to smooth it out. Then pipe swirls around the edge and fill the middle with more sprinkles!

Can this cake be made in different size cake tins?

Yes! If you would like to make this cake in different size tins, please check my Conversion Guide to find out how to adjust the recipe.

Can this cake be made into cupcakes?

Yes! Please head to my Funfetti Cupcakes post for the recipe.

Can this cake be made into a two layer cake?

Yes! Please check the notes after the recipe at the bottom of this post for details. It can also be made with one layer.

How long does this cake last and can it be frozen?

The cake will keep in an airtight container for 3 days in a cool place (depending on the brand of sprinkles, some can bleed their colour into the buttercream after a while). You can freeze the sponges either alone, or decorated (but do not freeze the sprinkles). Once the sponges are fully cool, wrap them well with cling film or put them in an airtight container with some baking paper between them. You can freeze the buttercream on it’s own in a tub, or you can decorate the cake and freeze it fully assembled.

To do this and avoid damage to the decoration, freeze it either in an airtight container. Or let it freeze solid on a cake board or plate, then wrap in cling film. Remove the cling film when you take it out to defrost it, if you don’t it could damage the decoration as it defrosts and softens. You can also freeze slices of the cake, again well wrapped in cling film or in airtight containers. 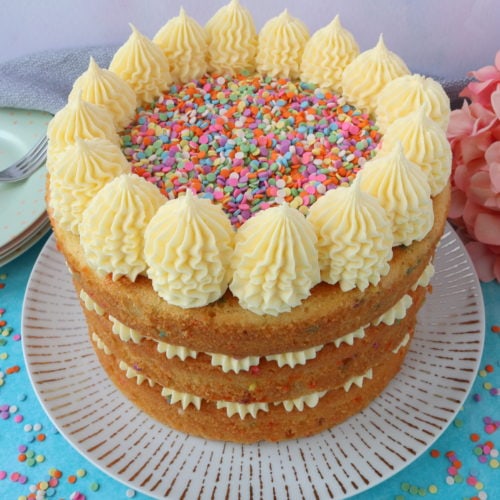