I really love mince pies and finding new ways to eat mincemeat is definitely high on my list of priorities in December! This Vegan Mincemeat Plait certainly fits the bill. My favourite kind of mincemeat is the luxury versions that are laced with brandy and/or port, as they give it that intense richness. I've never made my own mincemeat as I really think you can buy such good quality tasting versions in the shops. If you love mincemeat as much as I do, you'll also love my Mince Pie Cupcakes With Brandy Buttercream and my Mince Pie Bakewell Squares.

I've been kindly given a subscription to Vegetarian Living Magazine by PocketMags and I found this recipe for a Vegan Mincemeat Plait inside. I was immediately drawn to it, plus I had some fast action yeast to use up. Bread isn't something I make often as it can be time consuming, but this recipe is quick enough to make in an evening.

How to make Vegan Mincemeat Plait

Start by putting strong white bread flour, salt and fast action yeast into a bowl, making sure to keep the salt and yeast separate, then mix everything together. Warm up almond milk in a pan with light brown sugar and vanilla extract. Then whisk in olive oil. Mix the flour and milk mixture together to make a dough, then knead it for 6 minutes in a food mixer fitted with a dough hook. Then put the dough into an oiled bowl, cover it and leave it to rise for 30 minutes.

Flour a silicone mat, I love my Joseph Joseph Roll Up Non-Slip Silicone Pastry Mat, and roll the dough out in a rectangular shape. Melt dairy free margarine and brush it all over the dough, then sprinkle a mixture of cinnamon and dark brown sugar all over it. Then spread the mincemeat over the dough.

Roll the dough into a sausage shape, cut it in half, attach it at the top then twisted the two halves together. Place it on a lined baking tray and bake for 15 minutes. Then make a glaze from icing sugar, vanilla extract and almond milk. As soon as the Vegan Mincemeat Plait comes out of the oven, cover it in the glaze then leave it to cool.

This Vegan Mincemeat Plait was so yummy, the glaze on top sounds so simple but it's incredibly delicious! I'm not a vegan, but it's great to learn an easy vegan friendly recipe for the festive season that tastes amazing and will cater for friends who follow a vegan diet. Also it feels like a much healthier recipe as it doesn't use any butter or other high fat dairy products. 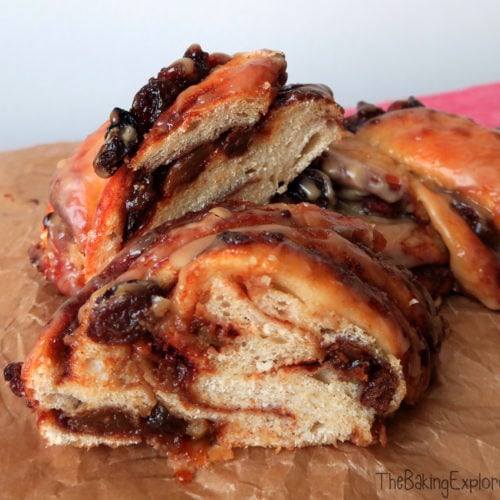 NB. I have received the subscription to Vegetarian Living Magazine and the Joseph Joseph product free of charge, all opinions are my own.