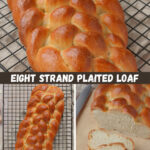 I decided to try make an Eight Strand Plaited Loaf after watching bread week on The Great British Bake Off, since then I've made a few of them! It's a basic bread dough, but shaped in a complex way, with a very impressive and attractive result. This Eight Strand Plaited Loaf is a great way to mix up your bread baking repertoire and have your friends and family wondering how you did it!

How to make an Eight Strand Plaited Loaf

In a large mixing bowl, or the bowl or your stand mixer, add strong white bread flour, fast action dried yeast and salt. Stir together, then add water and olive oil and mixed it together to form a dough. Knead the dough for 10 minutes, either by hand or in a stand mixer with a dough hook. Place the dough into an oiled bowl, cover with cling film and leave to rise for 1 hour or until doubled in size.

Tip the dough out of the bowl and knead it briefly, then divide it out into eight pieces. Flattened each piece and fold in half, then roll each piece into a long strand approximately 45cm/18" long.

Lay all of the strands out and attach them at the top. Each strand will be numbered from left to right, from numbers one to eight. Each time you move a strand, it will be renumbered to it's new position. Then follow the plaiting sequence:

When you get to the end you can either cut off any loose bits, or tuck them underneath.

Put it onto a lined baking tray that it lightly oiled, cover it loosely with cling film and leave it to rise again for 1 hour. Then glaze it with beaten egg and bake for 25 minutes.

How long does the bread last and can it be frozen?

Unsliced bread can be stored unwrapped for a day on your kitchen worktop. Once you slice it, I've found it best stored in a paper bag. You can also store in an airtight container or a ziplock bag, but the crust does loose it's crispness when you do this. However if you're just planning to toast it, then this is not an issue.

This bread will keep well for 2-4 days, however it really is best eaten within 1-2 days. 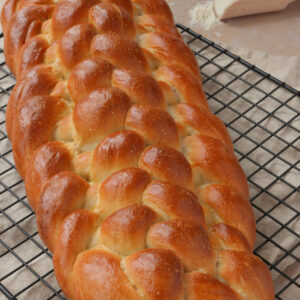