I've not had Neapolitan ice cream for years but I remember it well from my childhood. I always would only eat the chocolate and vanilla bits, but as my brother wanted the strawberry it worked out well! I've never been a huge strawberry fan which is why I've changed the strawberry layer to raspberry in these Vegan Neapolitan Cheesecake Bars. Let's break down the layers: a Biscoff biscuit base (yes those yummy Lotus biscuits are vegan friendly, woohoo!), a vanilla cashew cheesecake layer, a raspberry cashew cheesecake layer dotted with fresh raspberries, and finally a topping of delicious dark chocolate. A lot of vegan cheesecake style desserts tend to have date and nut bases, which are very delicious and healthy too, but I really wanted to do a biscuit base as they're so yummy. Biscoff biscuits went so well in these bars!

To get the cashews down to a smooth creamy cheesecake style texture I used the new KitchenAid Queens of Hearts Hand Blender from their new collection celebrating 100 years of the brand. It has five speeds so you can turn it up for extra power when you need it, plus a whisk attachment which is really handy for making whipped coconut cream! As KitchenAid are celebrating the creativity of it's makers to come in the next century I thought a vegan recipe was the perfect way to showcase how much has changed in baking and food over the past 100 years, and how creative you can be when you have the right tools!

This post is sponsored by Kitchenaid. All opinions are my own.

Start with the biscuit base, use a fod processor to turned Lotus biscuits into crumbs and mix them with some dairy free butter. Then press it into the tin. For the vanilla cheesecake layer, blend up cashews, coconut milk, maple syrup and vanilla extract. Put it in the tin then put it into the freezer to set.

For the raspberry cheesecake layer, blend up cashews, coconut milk, maple syrup and freeze dried raspberries. Smooth about a third of it into the tin, dot it with fresh raspberries, then smooth the rest of the mixture on top. Put it in the freezer to set. To finish, pour some melted dark chocolate on top, then cut into sqaures.

I'd recommend storing them in the freezer, but bring to fridge temperature to serve. You could eat them straight from the freezer but they'll be more like ice cream and not as soft. It depends what texture you prefer!

These Vegan Neapolitan Cheesecake Bars are absolutely delicious! The cheesecake filling is so creamy, you'd never guess it was made from cashews! I recommend eating them upside down as the chocolate layer gets quite hard so it's easier to break through it this way. 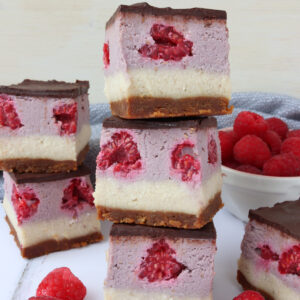 For the vanilla layer

For the raspberry layer

You could also use freeze dried strawberries and fresh strawberries instead of raspberries if you prefer. When eating, I turned them upside down as the chocolate can be quite hard and it stops the filling from squishing out the sides when you bite into it or use a fork/spoon to break into it