You may remember me mentioning back in late November that myself and my boyfriend were due to be moving into our first very own house before Christmas. Well, it got delayed. So we spent in Christmas in our flat with a pile of boxes in the next room containing half of our belongings that we had already packed in preparation. To be fair, it was a lovely Christmas as the company and the food were amazing, which is all I needed. I am very excited however that the move is now finally going ahead in two weeks time! I'm not sure how often I'll be able to blog before and after the move as it will be a very busy time, but I'll certainly do my best. Hopefully these deliciously Chai Cupcakes with Spiced Buttercream will keep you going for now!

I started by warming up the milk, then I took it off the heat and poured it into a mug. I added the chai spiced tea bags to it and left them to brew for around 10 minutes. Before removing them I squeezed them out as much as I could.

I poured the milk into a mixing bowl and added the eggs and whisked them in. 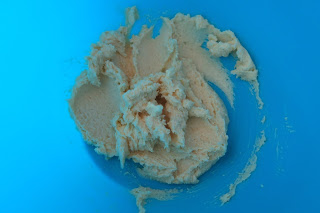 In another mixing bowl I creamed together the golden caster sugar and butter.

I poured in the milk and whisked it in. Then I added self raising flour, bicarbonate of soda, cinnamon, ground cloves and mixed spice, and mixed it in.

I divided the mixture between 12 cupcake liners and baked them for 20-25 minutes until they were golden on top and a skewer came out clean. I let them cool completely on a wire rack.

I used a piping bag with a Jem 1E tip to ice the cupcakes with the buttercream.

These Chai Cupcakes with Spiced Buttercream are packed with flavour from both the buttercream and the sponge. They are dark, spicy and deliciously warming which is very much needed this time of year. Pair one with a hot drink and you've got a match made in heaven!