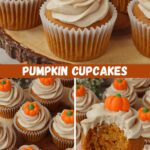 One of my favourite parts of both Halloween and the autumn period in general is the proliferance of pumpkin in all kinds of food and drink. My favourite is definitely Pumpkin Pie but these Pumpkin Cupcakes come a close second! However, I've never met a pumpkin baked good I didn't like! These Pumpkin Cupcakes are so easy to make with tinned pumpkin puree, and they are so moist and flavoursome. They're topped with a divine cinnamon infused buttercream too!

How to make Pumpkin Cupcakes

To make the cupcakes, whisk together the light brown soft sugar, eggs and vegetable oil. Then whisk in the pumpkin puree.

In another bowl, stir together the self raising flour, baking powder, salt and all of the spices. Add the flour mixture to the pumpkin mixture and whisk them together.

Divide the mixture between the cupcake cases. Bake for 25 minutes until they are golden. Leave to cool fully. To make the buttercream, mix the butter, icing sugar, vanilla extract, milk and cinnamon together until smooth. Pipe or spread it onto the cupcakes.

Yes! If you can’t get hold of the canned version, then you can make pumpkin puree from scratch. A 2kg pumpkin will give you roughly 675g pumpkin puree. The good news is, if you have too much you can freeze pumpkin puree. What you need to do is carefully slice up the pumpkin, deseed it and scoop out the stringy bits. Then you can either roast or steam chunks of the pumpkin until soft – it will take 20-30 minutes depending on the size of the pieces, use a knife to check tenderness. Allow the pumpkin to cool fully. Remove the flesh from the skin using a spoon, and then use a blender to puree the flesh. You now have pumpkin puree! It’s also great stirred into risottos or curries if you have leftovers. If it's not the time of year for pumpkins but you really want to make these pumpkin cupcakes, then you can use butternut squash too!

Can you decorate the cupcakes with cream cheese frosting instead?

Do you need an electric mixer to make these cupcakes?

No, in fact I would suggest making these cupcakes by hand with a whisk if you're able to. There's not much mixing involved and everything combines really easily so you won't get a dead arm! If you need (or want) to use a stand mixer, keep it on a low speed to avoid over mixing. For the buttercream, an electric mixer will provide the best results but it can also be made by hand if needed - with a bit of elbow grease!

How long do the cupcakes last for and can they be frozen?

Can you make the cupcakes with plain/all purpose flour?

Can the cupcakes be made gluten or dairy free?

If you have any questions about this recipe, or if something went wrong and you need help, please use the comment form below and I will get back to you. You can also get in touch with me on my Twitter, Instagram or Facebook. I'd love to hear from you! 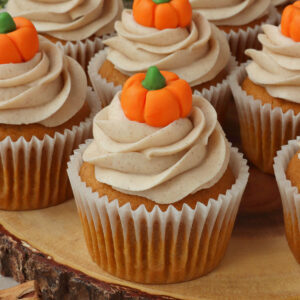 If you can't get hold of pumpkin puree you could also use grated raw pumpkin, or butternut squash would work too. You can also roast or steam the pumpkin, then puree it and let it cool completely before adding to the mix. Mixed spice is a British spice blend containing Cinnamon, Coriander Seed, Nutmeg, Clove, Pimento, Ginger. If you live in a country where pumpkin spice mix is readily available, you can swap the spices listed in the recipe for 2 tsp pumpkin pie spice mix. If you fancy using cream cheese frosting instead of the cinnamon buttercream, check out my Carrot Cake Cupcakes for a beautifully thick UK recipe for cream cheese frosting that pipes like a dream! If you do decorate the cupcakes with cream cheese frosting, they will need to be stored in the fridge.

« Things To Do With... Leftover Egg Yolks
Pumpkin Pie »