I absolutely love Halloween and all the spooky themed food that comes with it. These Slime Cupcakes fit the bill perfectly as they look rather scary with their black "burnt" sponge, bright green "toxic" buttercream and creepy candy eyes, but don't be fooled - they taste absolutely yummy! Once you bite into their menacing exterior you'll find gooey "radioactive" slime inside! I used a lime marmalade to create this effect, but you could use strawberry jam for a "blood and guts" theme inside too. Kids and adults alike will love making these fun slime cupcakes to disgust and delight their family and friends over the Halloween season! 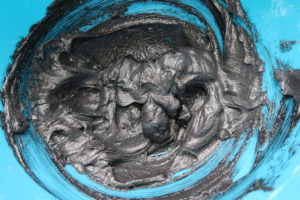 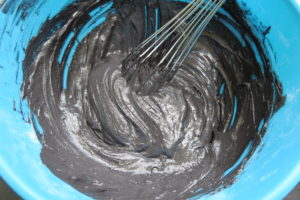 To make the cupcakes sponges I creamed together the butter and caster sugar, then added the black food colouring. I whisked in the eggs, vanilla extract and then the self raising flour.

I divided the batter into the black cupcake cases. They baked for 20 mins, I had to use a cake skewer to check they were done as they were so black!

When they fully cooled, I used a cupcake corer to make holes in the middle of each cake.

I added a little bit of lime green food colouring to the lemon and lime marmalade, then spooned it into each cupcakes.

To make the buttercream I mixed together the butter and icing sugar. I added the vanilla extract and the lime green food colouring until I had a nice bright green colour. I piped it onto the cupcakes then added the candy eyes!

Despite the spooky appearance of the slime cupcakes, they were extremely popular. Everyone was attracted to their bright and unusual colours. My friends and family were pleasantly surprised by the light vanilla flavour of the sponge and buttercream, and they loved the citrus zing of the lime marmalade filling.

For the filling and decoration