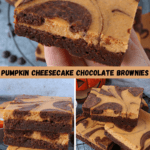 I absolutely love baking with pumpkin, and you may never have thought of mixing it with chocolate, but trust me it tastes so good! These Pumpkin Cheesecake Chocolate Brownies are the ultimate gooey chocolate treat, and swirled through them is creamy spiced cheesecake. They are amazing warmed up in the microwave and served with ice cream - heavenly!

These brownies just melt in your mouth, and the cheesecake swirl is full of autumn flavours like cinnamon and ginger. Make sure you use pumpkin puree, and not pumpkin pie filling (which is already pre-spiced and sweetened). You can easily find it tinned in the USA, and in the UK you'll find it in the American section of the supermarket and online. Or you can make your own.

To make the cheesecake batter, whisk together the cream cheese, caster sugar, egg, pumpkin puree, cinnamon, ginger, cloves and nutmeg until smooth with no lumps. Set it aside while you make the brownie batter.

Using a knife, swirl together the mixture to create a marbled effect. Then baked it for 35 minutes. Leave to cool fully, then chill in the fridge before slicing.

Yes! If you can’t get hold of the canned version (the two brands I known of are Libbys and Yes! If you can’t get hold of the canned version, then you can make pumpkin puree from scratch. A 2kg pumpkin will give you roughly 675g pumpkin puree. The good news is, if you have too much you can freeze pumpkin puree. What you need to do is carefully slice up the pumpkin, deseed it and scoop out the stringy bits. Then you can either roast or steam chunks of the pumpkin until soft – it will take 20-30 minutes depending on the size of the pieces, use a knife to check tenderness. Allow the pumpkin to cool fully. Remove the flesh from the skin using a spoon, and then use a blender to puree the flesh. You now have pumpkin puree! It’s also great stirred into risottos or curries if you have leftovers. If it's not the time of year for pumpkins but you really want to make pumpkin cake, then you can use butternut squash too! 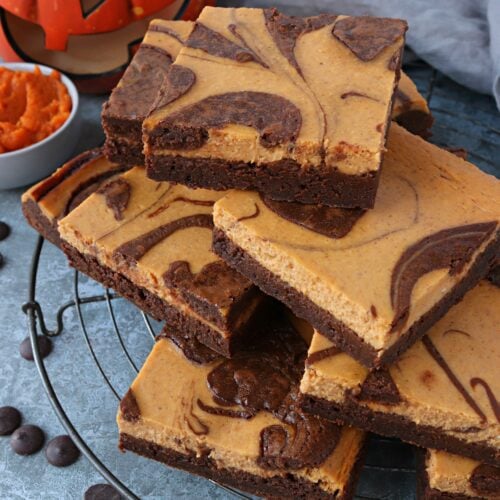 For the pumpkin cheesecake

If you would like to use a 8" or 9" square tin instead, reduce the recipe by one third. So you will need: Cheesecake: They will also need less time to bake, depending on your oven, I'd suggest 20-25 minutes.

If you like this, check out more of my Brownie recipes!