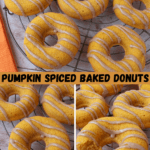 I absolutely love pumpkin spice, and baked donuts are one of my favourite things to make. They're also really easy to make! So Pumpkin Spice Baked Donuts are the perfect combination for me. They are packed with Autumn spices like cinnamon and nutmeg, they are deliciously moist and drizzled with a sweet cinnamon icing. Grab yourself some donut pans to make this recipe (check the recommended equipment section for a link) and you'll be surprised at how easy they are to put together!

To make the donuts, mix together eggs, pumpkin puree, caster sugar, vegetable oil and milk in a mixing bowl. In another bowl, stir self raising flour, cinnamon, mixed spice, nutmeg and ginger together.

Pour the egg mixture into the flour mixture and whisk until smooth. Then pour the batter into greased donut pans and bake for 12 minutes.

When they are baked, put them on a cooling rack to cool completely. Make the cinnamon icing for the donuts by adding water to icing sugar and cinnamon. Then drizzle it over the donuts.

The simple answer is yes! I highly recommend investing in a donut pan* (or two!), they are not expensive and they’re easy to obtain from Amazon, plus there are so many yummy baked donut recipes on my website that you’ll be able to make with them!

I've found tins of pumpkin puree in the American food section of large supermarkets like Tesco and Sainsburys. I have also heard that Waitrose stock it. It's sometimes available all year round, or sometimes only from September until December. It really does depend on the supermarket with this. Keep asking your local store, you may just bug them enough to get them to stock it! You can also buy it online, I have purchased it from Amazon before, and Sous Chef also sell it. It will be a little bit more pricey, but I've found good deals by buying several cans at once (it lasts over a year usually, or you could share it with friends).

Yes! If you can’t get hold of the canned version (the two brands I known of are Libbys and Baking Buddy) then you can make pumpkin puree from scratch. A 2kg pumpkin will give you roughly 675g pumpkin puree. The good news is, if you have too much you can freeze pumpkin puree. What you need to do is slice up the pumpkin, deseed it and scoop out the stringy bits. Chop the pumpkin into chunks, you don't need to remove the skin. You can either roast or steam the chunk until soft – use a knife to check tenderness. Allow the pumpkin to cool. Remove the flesh from the skin using a spoon to scrape it off the skin, and then use a blender to puree the flesh. You now have pumpkin puree! It’s also great stirred into risottos or curries if you have leftovers. 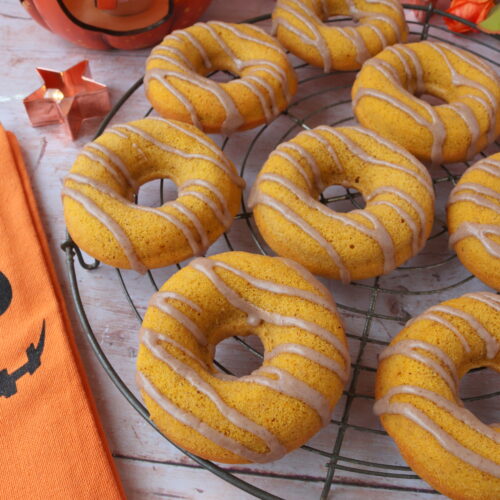