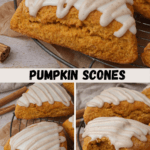 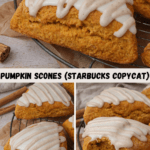 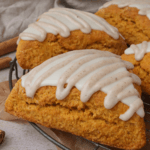 I absolutely love autumn baking! As soon as September comes I just want to put pumpkin and cinnamon in everything I bake! I make pumpkin pie every year and when I first started this tradition you couldn't buy tinned pumpkin puree in the UK. Now it's readily available I'm making lots of other pumpkin recipes too, like these yummy Pumpkin Scones. They are a 'copycat' recipe of a popular Starbucks scone that is served in America, if you are from there or have visited in Autumn you will no doubt recognise them!

They are fluffy and light, filled with Autumn spices and drizzled with two sweet glazes - one is vanilla and the other spiced. You can use one of them instead of both if you prefer, but together they make the scones look so pretty! The glaze and drizzle are so scrumptious and make the Pumpkin Scones into a lovely sweet treat perfect with a hot drink.

How to make Pumpkin Scones

First put the self raising flour, caster sugar, salt, cinnamon, nutmeg, ginger and cloves in a bowl and mix together. Then add the butter and rub together with your fingers until it resembles breadcrumbs.

In a separate bowl, whisk together the egg, milk, and pumpkin puree.

Combine the pumpkin mixture with the flour and mix until a dough forms. Place it onto a floured service and roughly shaped it into a circle. Then use a knife to cut it into triangles.

Place the shaped dough onto a lined baking tray and bake for about 15 minutes until beautifully golden brown.

Do you have to cut the scones into triangles?

This recipe makes six good sized triangular scones, which is an American style shape of scone. You can cut smaller triangles to get more scones, or cut English style circle shaped scones with a round cutter.

I've found tins of pumpkin puree in the American food section of large supermarkets like Tesco and Sainsburys. I have also heard that Waitrose stock it. It's sometimes available all year round, or sometimes only from September until December. It really does depend on the supermarket with this. Keep asking your local store, you may just bug them enough to get them to stock it! You can also buy it online, I have purchased it from Amazon before, and Sous Chef also sell it. It will be a little bit more pricey, but I've found good deals by buying several cans at once (it lasts over a year usually). 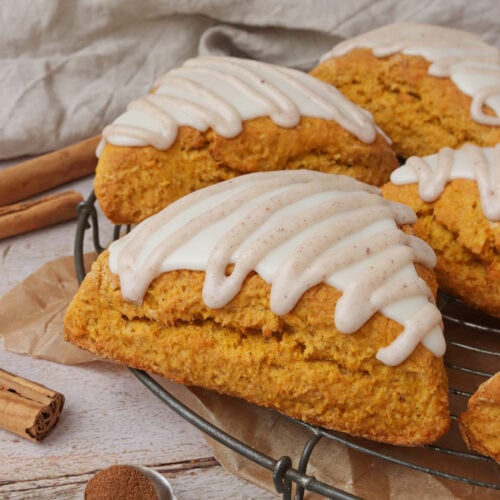 For the plain glaze

For the spiced glaze

If you like this, check out more of my Scone recipes!