So I already have a couple of fudge recipes on my blog, but this Terry's Chocolate Orange Fudge has to be my favourite so far! It's definitely the fudge I've eaten the most of! It's another easy no boil fudge recipe, which is a technique I absolutely love as it makes life so much easier. Just a bit of melting, some stirring, and then leave it to set and bam - delicious fudge! As we're approaching Christmas I thought Terry's Chocolate Orange Fudge was the perfect flavour for the holiday season. This fudge would make a great gift for family and friends, or an even greater gift to yourself! 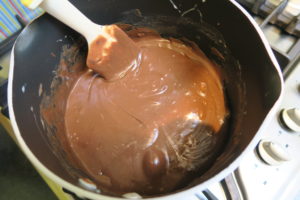 I started my melting the chocolate and condensed milk together in a pan on a low heat. 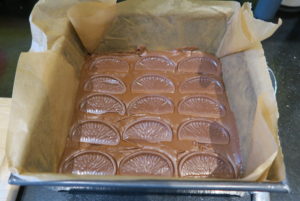 Then I stirred in the icing sugar and poured half of the fudge mixture into the lined tin. I covered it with Terry's Chocolate Orange pieces. I added the rest of the fudge mixture on top. Then I added blobs of the melted and coloured white chocolate, and used a cocktail stick to swirl it around.

Damn this Terry's Chocolate Orange Fudge was GOOD! I ate so much of it and so did my partner! I think I might have to make it again soon!

If you can bare to let this out of your house, then the Terry's Chocolate Orange Fudge would make a fantastic gift for family and friends!

I like to have a mix of milk and dark chocolate as I find full milk can be a bit too sweet, but if you can handle it then you can use 400g milk chocolate instead of 300g milk and 100g dark.

NB. This post is NOT in anyway sponsored by Terry's - I just love their product!

If you like this, check out more of my Fudge recipes!