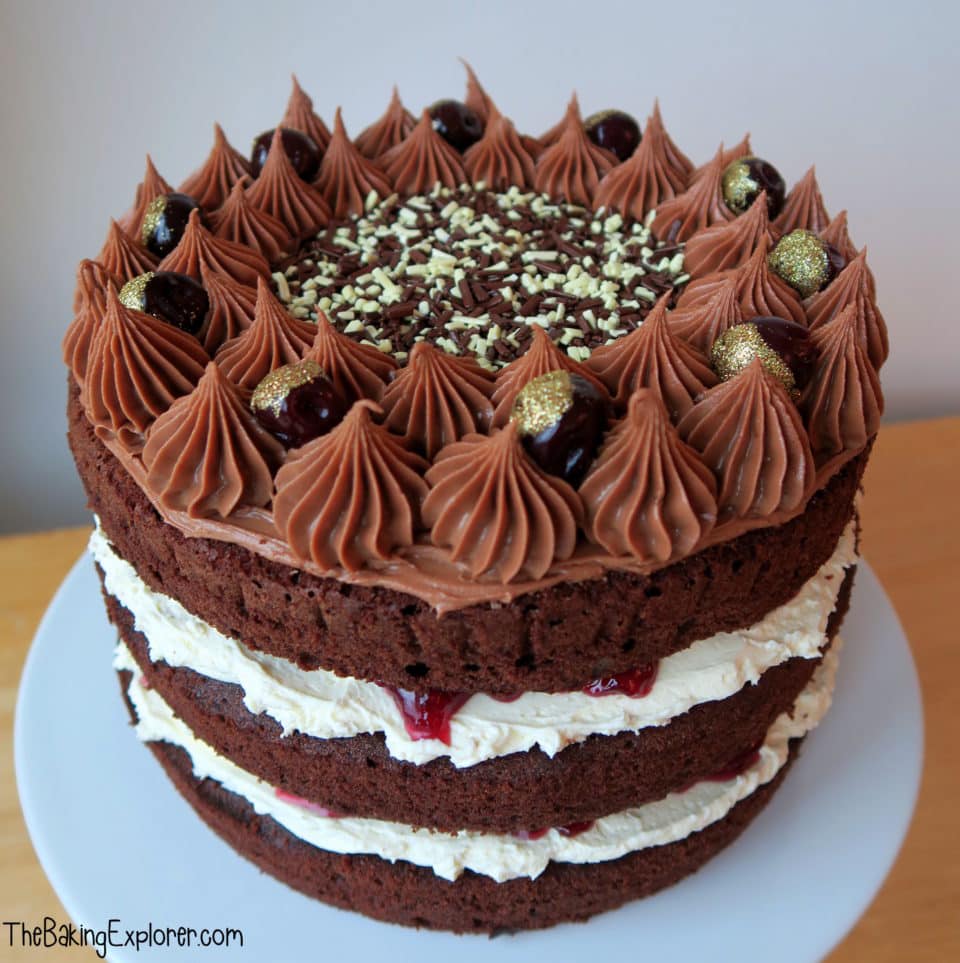 This Cherry & Nutella Chocolate Cake is a showstopping cake perfect for your next celebration! It’s layer of moist chocolate cake, with whipped cream and cherry jam. Then it’s topped with a Nutella buttercream and glitter dipped cherries. I love chocolate and cherry together, and this cake reminds me a lot of a black forest cake, but with added Nutella – which is always a good thing in my book!

I started by greasing and lining three 9″ sandwich tins. 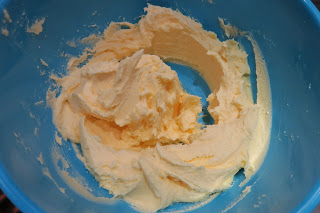 Then I creamed together caster sugar and butter. 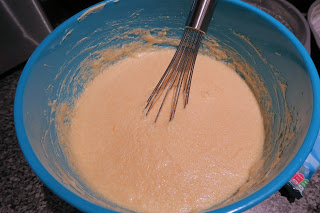 I added eggs, mixing them in two at a time. 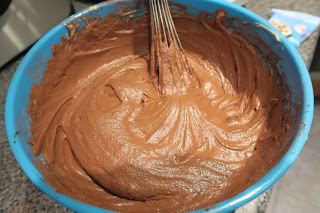 Then I mixed in self raising flour, cocoa powder and milk. 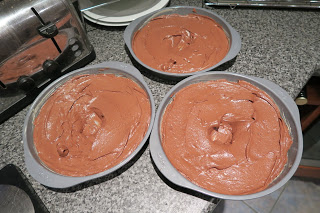 I divided the mixture into the tins, I always make a hole in the middle of the batter to try and stop it from doming too much in the middle. 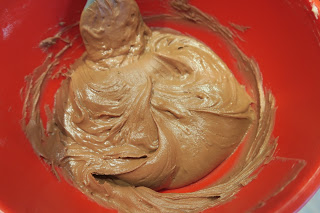 I made the nutella buttercream by mixing together butter and icing sugar, then I added Nutella and milk. and mixed it until it was smooth. 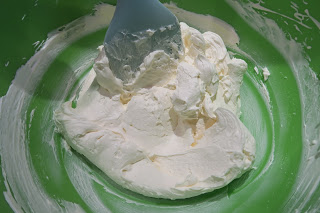 Next I made the cream filling by whipping up double cream, then mixing in mascarpone cheese 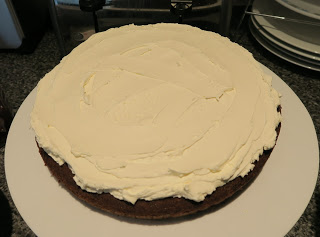 I started stacking up the cakes, I spread half of the cream mixture onto the first layer. 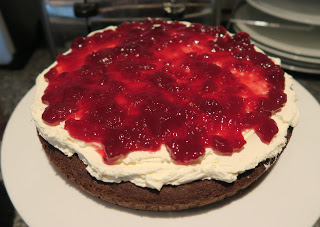 Then I spread half a jar of cherry jam on top. 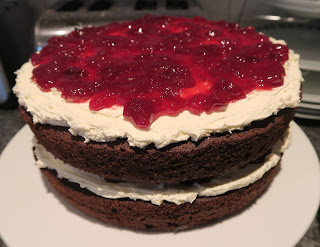 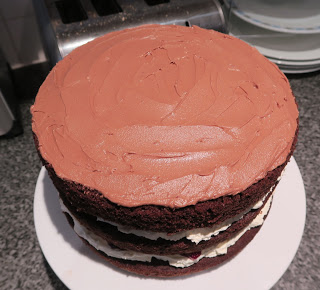 I then added the last sponge and spread a layer of the Nutella buttercream over the top using a palette knife. 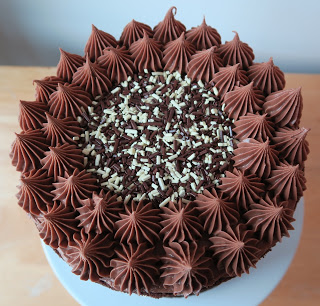 Then I put the rest of the Nutella buttercream in a piping bag and piped two rows of rosettes around the edge of the cake. I used a Wilton Number 6B Open Star tip for this effect. Also, I filled the middle with some Dr Oetker chocolate strand sprinkles. 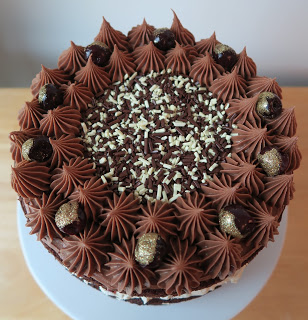 I took 10 cherries out of a jar of kirsch soaked cherries and put them on some kitchen towel to soak away as much moisture from them as I could. I then rolled half of each cherry in edible gold glitter and arrange them around the Cherry & Nutella Chocolate Cake.

The Cherry & Nutella Chocolate Cake was so yummy and if I do say so myself it’s one of the best cakes I’ve ever made! The sponge was lovely and moist, and the fresh cream and cheese filling was the perfect balance against the sweet chocolate and Nutella buttercream. I adore kirsch soaked cherries so they were a tasty bonus for me. 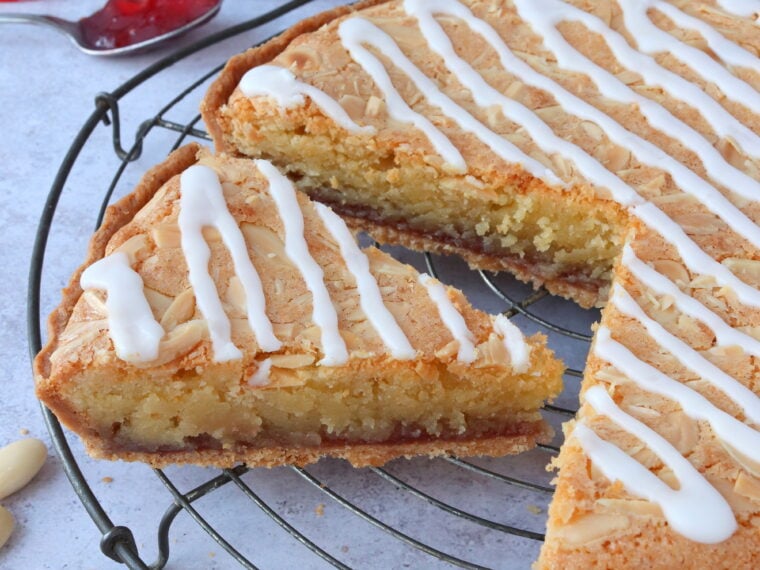 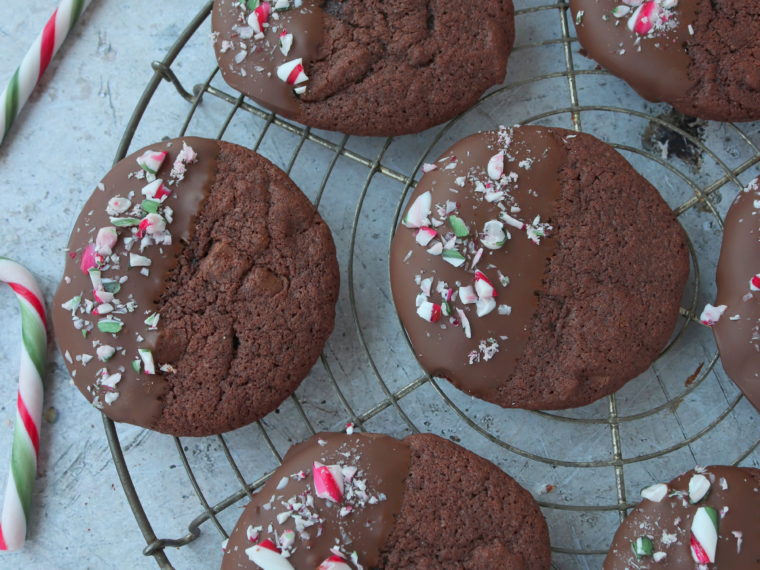 If you've not made Homemade Bagels before, then I

If you've got any leftover marzipan from Christmas

These Healthy Cheesecake Pots are a mix of yoghurt

I recently added a recipe video to my Salted Caram

If you have any apricot jam sitting in the fridge

Whether you're doing Veganuary or not, you need to