I've been dreaming about making these Raspberry & Nutella Bread Rolls for a while. They are made from soft enriched bread dough that I've filled with Nutella and fresh raspberries. The sweet chocolate goes so well with the fruity raspberries, it's a combination I've had on toast many times before and really enjoyed! The process is similar to making cinnamon rolls, just the filling is different - but no less delicious! They're amazing warm fresh from the oven, or you can reheat them later and have them with ice cream.

I started by putting the plain flour, fast action yeast, salt and sugar in a large bowl, then stirred them together. In a pan I warmed up the milk and butter until the butter melted, then I added the vanilla extract. I let the mixture cool for 5 minutes, then whisked the egg into it.

I poured the milk mixture into the flour mixture and brought everything together into a sticky dough. To knead the dough, I popped it in my mixer with the dough hook attachment for 10 minutes. Then I placed it in a covered oiled bowl to rise for 1 hour.

I rolled the dough into a sausage shape and used a sharp knife to cut it into equal pieces, marking out the pieces before I cut with a ruler.

I covered them again and left them to rise for an hour. They baked for 20-25 minutes, until golden brown. For extra yummyness I drizzled warm Nutella over the Raspberry & Nutella Bread Rolls, and sprinkled on some freeze dried raspberries. 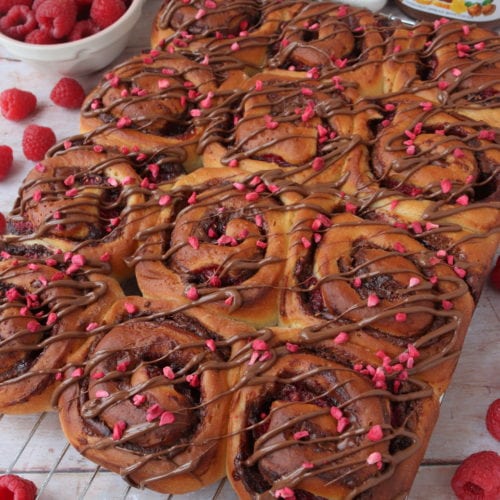 I'm linking this recipe up with Cook Blog Share hosted by Recipes Made Easy, and Fiesta Fridays hosted by Life Diet Health and The Not So Creative Cook.