As you will know if you’ve been to my blog before, or if you follow me on social media, I am a huge fan of The Great British Bake Off and the Queen of Baking that is Mary Berry. I was beyond excited when I was sent a set of Mary Berry Homeware! I first saw Mary Berry’s homeware range at the BBC Good Food Show and I immediately fell in love with it’s pretty patterns and pastel hues. The range is beautifully packaged and presented and I wanted to make something that really complimented it. So I decided to use the colours in the range – pastel pink and teal to make these gorgeous Mini Layered Easter Cakes. And seen as it’s Easter, they just had to be topped with mini eggs!

To start, I made the sponges. I had three mixing bowls and into each one I put butter and caster sugar. I then put drops of blue, pink and yellow food colourings into the mixtures, I made the colour slightly stronger than I wanted the final result to be as the eggs and flour would lighten it. My preference is to add food colouring at this stage as later on it can remove air from the mixture as you over mix to get the colour right.

I added eggs and vanilla extract to each bowl and whisked in. Finally I folded self raising flour into each bowl.

I baked each sponge in a lined traybake tin on 180C/160C Fan/350F/Gas Mark 4 for between 10-15 minutes. To make sure they were done I inserted a skewer into them. I don’t have three traybake tins, I only have two, so I baked two first and then the third. I made sure not to add the flour to the mixture of the one that was waiting to be baked as this would affect the texture of the final cake.

When the cakes were fully cooled I used a 3 inch cookie cutter to cut 6 circles out of each sponge. I didn’t throw away the leftovers, I whizzed them up in my food processor then put them in a freezer bag and froze them. I’ll use them to make cake truffles in the future.

I made a vanilla buttercream and used my Wilton Number 6B Open Star tip to pipe blobs of it on the blue bottom layer.

Then I did the same with the middle yellow layer, then topped with the final pink layer.

I then used a Wilton 1M tip to pipe rosettes on top of each cake and I placed three different coloured mini eggs carefully into the middle.

I was so pleased with these Mini Layered Easter Cakes, they look so pretty and I though they really complimented Mary’s beautiful homeware range. They tasted pretty scrumptious too! The sponge was lovely and light and the delicate vanilla buttercream was the perfect finishing touch. I felt like I could almost have been at afternoon tea with Mary Berry herself – a girl can dream!

My friends and partner absolutely loved the Mini Layered Easter Cakes. They looked so pretty, and the colours and decoration could easily be changed for any occasion. 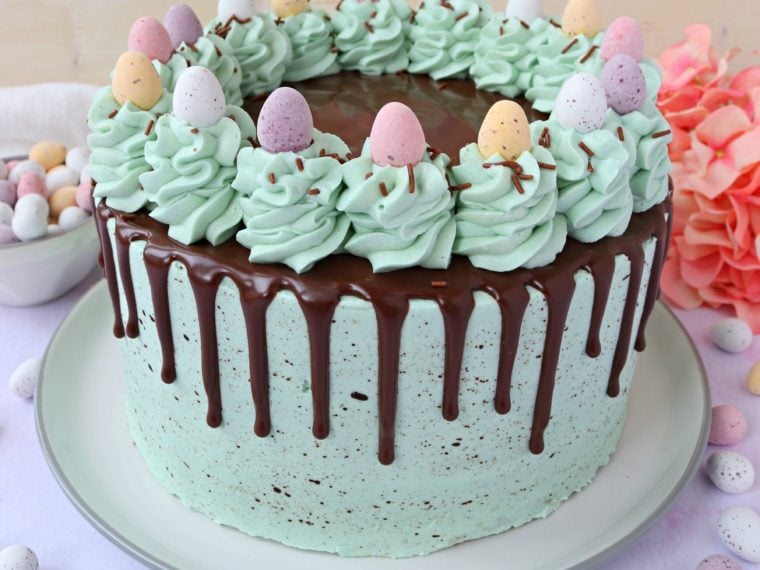